We were looking for a quick getaway over Memorial Day weekend and settled on a road trip through the tourist traps and parks of South Dakota and SE Wyoming. I had been to the area many times in my youth and knew Molly would enjoy (most of) it.  Molly had been traveling like crazy for work and so we were limited to a Monday-Monday trip. We set out for Rapid City, SD on Memorial Day and hit a few “attractions” along the way–the Mitchell Corn Palace and Wall Drug. They were as unimpressive as I remembered as a kid, but Molly was quite amused by their quaintness. 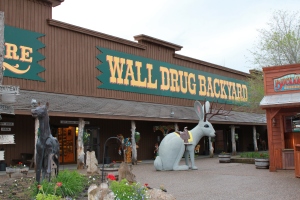 The Fairfield Inn in Rapid City, SD was our home base for the week so after checking in and ordering pizza, we spent the night at the indoor waterpark people watching and sneaking beers into the hot tub.  The hotel pizza was surprisingly good even considering our pizza snob status being from Chicago.

Feeling rested, we were off to Devils Tower in SE Wyoming the following morning. Unfortunately there was some rather confusing road construction and got off the beaten path.  We quickly found out that what passed as roads in WY would not even be on a map around the Midwest.  However, Molly got to see her first open range cattle, and we got to approach Devils Tower from a truly unique angle. 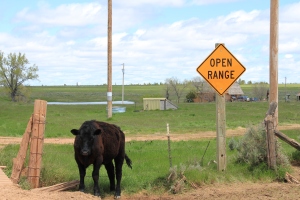 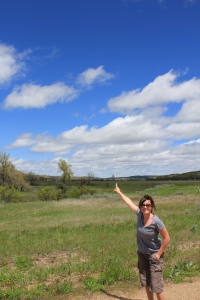 Unlike the tourist traps we had visited the day before, Devils Tower was exactly as impressive as I had remembered.  We spent the day walking and scrambling around the Tower.  When we reached as high as we could safely go without climbing equipment, we sat down and had a  picnic lunch enjoying the view of the plains before us and the looming mass of the tower at our backs.  During our time there, we met up with a couple climbers who were road tripping across the country sight seeing and climbing as they went.  It was fun to watch a couple pros at work and we got a new appreciation for how difficult non-gym climbing really is. 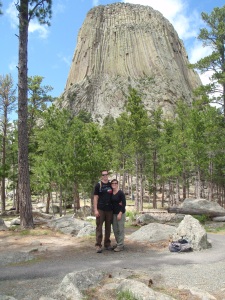 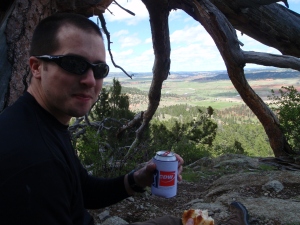 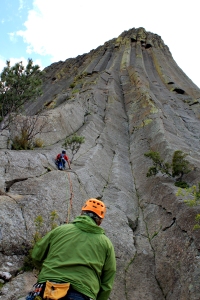 When we our necks were tired of craning upward, we headed back east toward Spearfish, SD to get some local knowledge about area mountain biking and camping.  The bike fanatic employee at Rushmore Mountain Sports on Main Street was beyond helpful and pointed us in the right direction for both.  There were basically two options for camping, the city park, or the Hanna Campground up the canyon near Lead, SD.  Although difficult to find, it was a pretty drive and nice to get away from people finally.

A day of epic mountain biking awaited us the next day, so after dinner and a short campfire, we got to bed.  The name of the trail is escaping both of us while writing this, but it offered fantastically long  downhill romps followed by grueling, but doable uphill grinds.  The views were phenomenal at the tops of the hills and we agreed that the trail was far better than our normal singletrack stomping grounds at Kettle Moraine, WI.

A sweaty, muddy night in the tent did not sound appealing, so when we finished our ride we headed back to Rapid City for another night at the Fairfield.  Mount Rushmore was our next destination and we had a perfect day to enjoy the monument.  Although not the highlight of the trip, it is a neat piece of American history and a key component to any cross-country road trip. 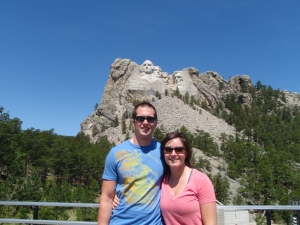 Harney Peak State Park was our next destination, and we had planned to do a night of backpacking taking in some of the best scenery the Black Hills had to offer.  From the Sylvan Lake Trail Head, we headed up the heavily-used Harney Trail.  The trail was surprisingly poorly maintained for how crowded it was until we passed the summit which was the turn around point for day hikers.  After that, the masses disappeared, however, the trail was still littered with downed trees due to the pine beetle infestation in the area. 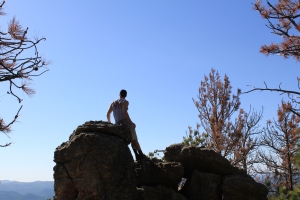 We found a beautiful campsite nestled among huge lodgepole pines and surrounded by granite spires.  After setting up camp, we enjoyed dinner, a bottle of wine, and a gorgeous sunset over the Black Hills.

It was a beautiful night enjoying the stars without the tent fly.  In the morning, we finished the loop back to Sylvan Lake on the Lost Cabin trail.  It was not all that spectacular and we were still plagued by downed trees.  We reached the truck by early afternoon feeling ready to get moving onto the the last leg of our trip, the dreaded Badlands.

The Badlands had always been one of my favorite places to stop on my family’s annual camping trip in the Bighorn Mountains of WY, but Molly was less than thrilled with the thought of spending a couple nights in the desert surrounded by rattlesnakes and other creepy crawlies. However, my persistence prevailed and I succeeded in convincing her that this opportunity may not be around forever:  as of our trip, backcountry camping was allowed in pretty much any area of the park.  Policies like this are a rarity; and overuse has eventually ended this freedom in many other wilderness areas. 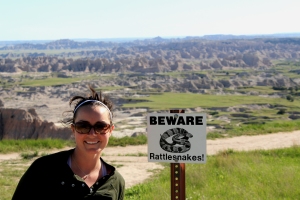 We checked in at the ranger station and then drove the length of the park to the Sage Creek Campground.  It was nothing like we had envisioned:  instead of solitude surrounded by the eerie crumbling spires of the Badlands we found a flat prairie filled with hippies smoking dope and playing guitar.  Deciding that we would both sleep better in a Wall hotel, we took our time on the way back through the park enjoying the native Bison and the sunset.

The next morning Molly was feeling slightly better about things and we headed back to the park to loosely follow a route I had read about in Backpacker Magazine.  We parked at the Conata Picnic Area, geared up, and headed out into the Badlands.

We traveled slowly, partially because we were not on a trail and frequent compass checks were necessary, but also because the tall grass was prime rattlesnake habitat.  Once we were through the grass, we could skirt the Badlands formations with relative ease and found our way into a winding wash which ended up being a perfect place to set up camp.

Since we had only hiked in a mile or two, we had most of the day to explore around our campsite.  After some vodka to calm her nerves, Molly even ventured out and about to take some great pictures.

It was an absolutely perfect evening soaking up some sun and watching the sun set in a surreal place.

Our last morning of the trip started with molly feeling happy, relieved, and proud about conquering her fears.  We hiked back to the truck and headed for home, hoping that this rare backcountry experience in the Badlands will be something that will always be permitted.