Molly’s 29th birthday was looming, but again, so was work.  We wanted to get to Colorado this year and were determined to get a trip in, but plans kept getting pushed back and late September weather in the Rockies can get a bit dicey.  Snow and cold be damned, we left for Fort Collins on Sunday, September 18th as soon as Molly got done working the BMW Championship on the PGA Tour.

After a nice relaxing 14 hour drive, we finally smarted up and decided that a good night’s sleep was a prudent choice before hitting the trail so we checked in at the Fort Collins Courtyard Marriott and headed out for some food.  Downtown Fort Collins is always a good time with its mix of earthy mountain shops, yuppie hiker gear, and of course, music playing hippies.  While at Coopersmith’s Pub and Brewing, we enjoyed some fabulous burgers and hoppy locally brewed IPAs.  The food was great, the beer was cold, and prices were reasonable.  After a quick dip in the pool and hot tub back at the hotel, it was time for bed.

Tuesday morning we hit the trail, leaving from the Brown’s Lake Trail Head in the Comanche Peaks Wilderness not too far outside Fort Collins.  Poudre Canyon had become one of our favorite places so we took our time getting there, stopping for a picnic lunch and wishing we had brought the fly rods.  At the trail head, the wind was ripping and getting colder.  Snow squalls looked immanent, but the forecast said this would likely be the worst day.  Thankfully, my sister had given Molly a new down puffy coat for an early birthday present so we bundled up and hit the trail.

The trail to Brown’s Lake was well maintained, easy, and well-marked.  We hiked around 4 miles through a couple weak snow squalls, arrived at the lake, and set up camp.  Since this was a heavily used area during the summer months, no campfires were allowed and we were forced to camp in designated spots — sort of a bummer, but totally understandable.  Brown’s Lake was pretty enough, but the altitude and cold quickly got the best of us and we had a hasty dinner and happy hour and then headed for bed.

Wednesday morning greeted us with sun and warmer temps as we rose from our bags and busied ourselves breaking camp.  We were headed on a short 4 mile hike to a small stream on Hourglass Trail.  It was easy going at first with nice views of the Browns Lake area, but then turned into a loose, gravelly decent down to the reservoir. 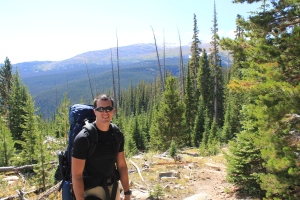 The reservoir was really quite strange considering how much natural beauty was surrounding us and I couldn’t help but wonder what the valley looked like before it was drowned.  Nonetheless, our quads were burning from the steep decent, so we parked our butts on some big boulders lining the trail and skipped rocks, relaxed, and tried to forget that this was not a natural body of water.

After the reservoir, the trail sharply steepened and we found ourselves struggling uphill the last mile or so as the weather closed in around us.  We found a great little campsite not too far off the trail and next to the stream that had clearly been used in the summer months which already had a fire ring and nice area cleaned and leveled for a tent.  It was a great night despite the cold and snow (I think we had finally grown accustomed to the altitude and chill).

Waking the next morning, we again found the weather much improved and set out on what we knew would be a difficult day.  Our plan was to continue 5.5 miles up (literally) the Hourglass Trail and camp by the stream just after it joined the Brackenbury Cabin Trail. The hike was difficult and water proved to be scarce after heading away from our camp stream, but the views along the way were certainly beautiful. 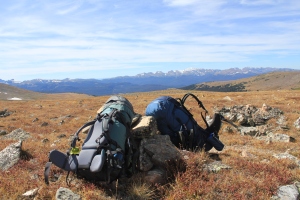 Although we were both tired, I had read that the Mirror Lake Overlook was not something to be missed so we took the short detour  following the cairns which marked the trial.  It was spectacular!  We could see the stunning Mirror Lake Valley as well as a nice corner of RMNP which we had not visited yet.

Our campsite was a short ways back down the trail and we quickly found an epic campsite nestled among the stunted pines and set up Molly’s 29th birthday campsite.  After washing up in the nearby stream, we had an absolutely perfect happy hour, dinner, and sunset over the Rockies.

The following morning, we both knew we could not top this campsite and decided to end the trip on a high note by hiking all the way back to the trail head.  It was a long day (10+ miles) punctuated by taxing climbs and great views, but the thought of a bed and a hot tub drove us on.  The vista looking down onto our first night’s campsite at Browns Lake proved to be alluring and we rested up in the alpine prairie before bushwacking a shortcut from the Flowers to the Browns Trail to get back to the car.

Our efforts of the day were rewarded by a great soak in the hot tub back at the Courtyard and pulled pork sandwiches delivered by Souza’s Smokin’ BBQ.  The sandwiches were cheap but delicious and hit the spot after 3 nights of camp meals.

Overall, it was a phenomenal getaway, and Molly said there was no other place she would rather be than high in the Rockies as she prepared for her last year of her twenties.