Every few years, my parents graciously take our family on a tropical vacation.  We had spent the last two in Barbados and were ready for a change of pace.  The consensus was that we wanted a place with less people, less restrictions, and less driving.  Considerations ranged from the Cayman Islands to Belize to St. Lucia.  My friend Leif and I had always dreamed of doing an epic SCUBA adventure in Roatan, Honduras, so I suggested it.  My mom’s brother Gary, an avid Central-American traveler, had also recommended Roatan as one of his favorite places to escape the colder months of the Great Midwest.

The more we learned about the island of Roatan, the more we liked it.  Gary had stayed at Hobbie’s Hideaway where we could rent a 2 bedroom unit on the beach for around $100 per night, swim to the reef just offshore, and take a taxi pretty much anywhere on the island for $2.  My parents booked the unit and the flights and then it was time to do some research about diving, dining, and entertainment while we counted down the days…

When our day of departure finally arrived, we were pleasantly surprised by how easy it was to get to Roatan; after a 3 hour flight from Chicago to Miami, it was only another hour and a half to Roatan.  The first thing a traveler will notice upon arrival is that the airport of the hilly, green island is literally ON the ocean, a very welcoming sight after months of brown and cold Midwestern winter.  Surprisingly, all of our bags arrived on time (Molly had spent 3 days without her suitcase during our last trip to Barbados) and Hobbie himself picked us up at the airport.  He gave us a quick history and tour of the island on the way to his place, and even took us to the grocery store to stock up.

Looking at the website for Hobbie’s Hideaway, my wife, sister, and I had been a little nervous.  The interiors seemed a little rough and cramped and we couldn’t really get a feel for the outdoor space other than the expansive pier in the posted pictures.  However, we were pleasantly surprised by the huge covered patio complete with chairs, tables, and a bar and restaurant that is open on Sundays.

The interior was dated and small, but clean; and for $100 per night, you can’t expect 5 star accommodations. Besides, who goes on a beach vacation to spend the week inside?  The kitchen is somewhat stocked with spices and other drygoods that guests leave behind, but don’t expect too much in the way of food waiting.  After our grocery store run, we made some rum drinks and headed out to the part of Hobbie’s Hideaway where we would spend the majority of our time:  outside!

As you can see, the shallow seagrass flats at Hobbie’s did not make swimming ideal, however, the water off the end of the pier is chest-deep with a sandy bottom which was quite nice when we were in need of a dip.  Also of note are the sand flies in Roatan; they made a person think twice about doing much on the beach.  Sand flies are very prevalent on almost all beaches on the island and leave large, red welts that are EXTREMELY itchy.  While this seemed like a bummer at first, it was actually much more pleasant sitting out on the dock where the salty ocean breeze and available shade was much more pleasant than the sweltering, slightly airless beach.  When we did engage in beach activities, we just made sure to put on plenty of bug dope and washed our feet afterwards.

There is an amazing reef just offshore at Hobbie’s which requires swimming a couple hundred yards over a deeper (~15 feet) seagrass channel.  Boats do use the area with some frequency, so we were sure to look up regularly to check for oncoming vessels.  Getting to the outer reef can be a bit tricky and there is only a small, shallow part in the break where swimmers can get through without getting dashed on the reef.  The inner reef was vibrant and had plenty of large coral heads and spiny lobster, but not a huge diversity of fish; possibly due to the lionfish invasion occurring in the Caribbean.  At high tide, the outer reef is not as daunting and visitors will find larger corals, more plentiful and diverse fish, and the wall was impressive to say the least.  A couple turtles even crossed our path on more than one occasion. 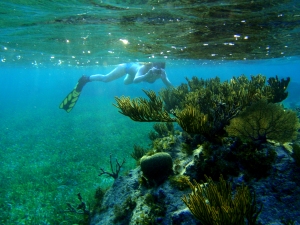 If you are of the hunting mindset, there is a lionfish spearfishing certification class for $50 in West End at the Marine Park Headquarters. It takes about an hour and includes a gig.  Hunting lionfish not only provides for delicious, fresh fish every day, but also thins the population of this invasive species.  Even freedivers of moderate skill will enjoy going after these spiny fish.  They are relatively slow-moving and will usually allow divers to get within close gigging range for a kill shot.  We found the most effective strategy was to equip one diver with the gig and another with a couple mesh bags and a pair of kitchen shears.  When a kill is made, keep the fish on the spear, cut its venomous spines off with the shears, and then put the de-finned fish into the mesh bag. 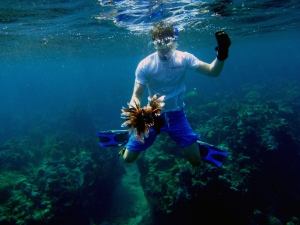 The SCUBA diving off of Roatan lived up to its reputation.  My sister and I hooked up with Ocean Connections and went on two wall dives, hitting about 90 feet each dive.  Both dives blew anything I had done in the Keys, Barbados, or Hawaii out of the water.  Monolithic coral heads, schools of fish that blot out the sun, and crystal clear waters made for two of the best dives of my life.  We had planned on doing a night dive close to the end of the week, but unfortunately ran out of time.  The crew at Ocean Connections were laid back and were more than happy to design the dives around our preferences.  Underwater, the dive masters were pretty hands-off, but made it a point to show us some of the smaller, more interesting reef creatures that we would have missed without them. 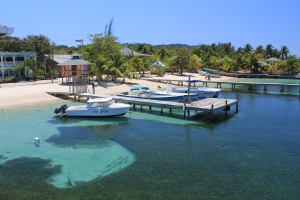 West End is the tourist district of the island and is pretty unremarkable as far as Caribbean towns go.  Clean, brightly-painted shops, restaurants, outfitters, and bars line the quaint main drag; however, I could never escape the sense that it was not at all the authentic Roatan.  To make matters worse (for us, not the locals), West End is also a major cruise ship port and several times a week these monstrosities dump swarms of pasty tourists onto the island.

To escape the rest of the tourists, Molly somehow convinced me to rent a moped and we took a day exploring the island on our own and trying not to crash.  If you are interested in seeing a more realistic side of the island, this is perhaps the best way to do it.  There is only one road, so you can’t get lost, and it is fun to see the working areas of the island and how the majority of the locals live.  The local bus system is also a great way to get a better feel for the island and its people as well.  It should be noted that the bus only costs $1 per person, whereas a taxi costs $2.

All in all, our trip to Roatan was incredibly relaxing and rewarding.  There was enough to do to keep us busy when we wished, and Hobbie’s Hideaway had plenty of space for relaxation and soaking up the sun, sand, and sea.  Snorkeling and freediving right off the dock was a HUGE bonus and the daily fresh fish the lionfish permit provided was icing on the cake.  The island seemed clean and safe, but those seeking a cultural experience will most likely be disappointed.  We would definitely recommend this trip to anyone looking to get away from the cold and especially to the diving and snorkeling connoisseurs!